Break out of the box and claim your space! 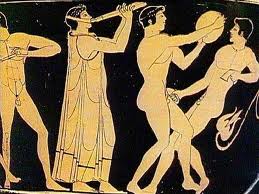 The other day I found myself in a Greek Operetta concert quite by accident. As I went to the little bar at the back I met a friend of mine and found out he was singing. He was excited to be a guest singer, because the other artists had come from the staggering heights of Athens and were professional Greek Operetta singers. I know Lefteris, I’ve been in his rehearsals a couple of times and I’ve heard him singing on stage and I know he’s a good singer. Meanwhile he is telling me how honoured he is to be singing with these people because he says “…they are a really high level.”

So the concert starts only half an hour on time (only the English would call it late) and Lefteris presents from the podium the professionals from Athens, who it has to be said, were touching on the slightly ridiculous, in the crumbling building of Paros' little municipal hall, with their stances as if they were in a huge international opera hall. They had their artist outfits on, ever so slightly toned down for the occasion with the noticeable absence of dickie bows, but sporting butterfly shirt collars for the men and the lady wore a romantic red ball gown. They certainly looked the part. They had reasonably good voices for professionals, though in my opinion somewhat dulled, held back somehow, as if the volume was just a little lower than necessary. All except the bass, who stood on stage as if he were a Male Madonna, nose held high, staring to the skies in whimsical anticipation…and he sang with wonderful deep timber tones that vibrated through bodies into those places where the emotions lie hidden.

All was fine and dandy and very professional given where and who we were. It has to be said Paros is not short of talent since its energy and landscape attracts all sorts of highly cultured artists especially musicians and painters, and these singers were no different. They fitted in perfectly with their class performance of Greek Operetta.

And then the moment came, when Lefteris announced the Fairy song and I knew from our little talk at the bar, that it was his big moment: his chance to sing with the big boys.  On came the bass with the big nose pointing to the imaginary stars, poetically leaning on the piano ready to be painted by El Greco, with his impeccable dress smelling of roses. Meanwhile my friend was on the other side of the stage, with wrinkles in his clothes as if he had been scrunched up long hours at a computer, and his chosen stage stance was: shoulders slightly hunched. He looked as if having knocked on the wrong door he had suddenly been exposed to the limelight when he had been expecting to go home for a fish and chip dinner, or rather, lets say a mousaka.

The nose sang first, his deep timbres resounding around the music hut, sorry hall, and sang with such passion that it would be difficult to accompany, but my friend, Lefteris, did just that. He was transformed.  He opened his mouth and allowed his sweet strength of fragility to vibrate in waves of sounds which seemed over-brimming with that tingling sensation of love. He has such a special voice, so fresh to be almost virginal, so filled with emotion that his voice flowed in and out beautifully with the bass.

Later Lefteris had another duet, which was similar to the first in the fact that he looked like a drowned rat who suddenly shook himself off and sang like a prince.  In my untrained opinion his voice was at least equal to the two elder singers, who to my taste were coming to the other end of their career, with big nose leading the ceremony with his dandy ways.

Then there was a finale of four songs in which they all sang together, and again I noticed that they all had their studied stance, except our good old Lefteris. He somehow got himself jammed up between the piano and the spatial needs of the red ball gown’s expressional arm flapping and body swivelling as if there were no-one else on stage but herself, or at least she was the only one everyone was looking at. I wondered at one point whether he would duck and squat beneath the black grand piano and sing in a press-up.

And yet, again, you could hear the sweet tones of his voice merging in and out with the others in wonderful harmony, and I realised that the only thing that separated our hero, the amateur, from the professionals was not his voice, or his ability; but his attitude. He simply wasn’t taking up the space he deserved. He was not allowing his voice free bodily expression, he was not showing himself, he had not developed a mask strong enough to take the burning attention of an audience.  He wasn’t passionately swinging around with confidence with aeroplane arms like the others or taking the lady’s hand in an act of stage love, nor staring to the stars or staring straight into the audience longingly (which are all actually very effective) but instead darting about with his eyes, stood still afraid that someone might notice he had sneaked on stage beside these divos and diva.

And there you have it: Attitude.  And I wonder if that is what many of us trip up over - not having the attitude in accord with our skills, with our performance.  Now I am not saying to go into public doing something that you have no idea about with an attitude of being professional, for that is simply a short cut to looking like a prize Charlie. But once having found a talent within, have the confidence to develop it, practise it over and over so that you are confident, until you know you can, and then when the opportunity arises ¡man! just go for it full on until everyone looks at you like you really are a pro, until that spark moment when you actually believe it yourself. Then you’ve done it! It’s a matter of having the balls to pretend til it's real.

I don’t want to sound all holy-moly, but Jesus said in the Gnostic Gospels:

And here are others who have had the confidence to express themselves in all their glory so that the world has actually listened to them, and what’s more quotes them:

To fully be a human being is to take full responsibility for one’s part in the co-creation of the world.
Joel Federman

Alas for those that never sing, but die with all their music in them.
Oliver Wendell Holmes

We are, each of us, our own prisoner. We are locked up in our own story.
Maxine Kumin

I want to sing like birds sing, not worrying who listens or what they think
Rumi

So, lets break out of our boxes a little, and swing those arms, express ourselves freely taking up the space in our lives that we deserve. Faith in ourselves to practise, faith in ourselves to allow us to continue to our goals, and socking it a big one when the curtain goes up.

We can do it. It is us, and though never perfect enough often, it is good enough. As we put the emphasis on our duty to express who we are, suddenly it is not so important if we are recognised, even if there is no audience, we have the simple satisfaction and overwhelming joy of having done it.

Let our creative expression out!  Our uniqueness needs to be born into this world, what ever it is. It is time that we took the space that we deserve in this world!  If you are a writer, claim your shelf space, if you are a dancer, dance your space, if you are a techno-whizz, cyberspace it up, and if you are an organiser, organise…and then even if our voice isn’t exactly up to scratch, having the right attitude and going for it whenever we can gives us space to move towards those steely heights rather than staying at home with our crumpled clothes on. 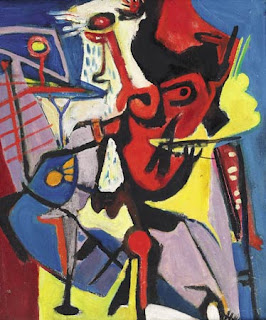