In Barcelona we studied Wolfram's 'Parsifal', the oldest book in the Western culture. Perhaps the first book ever to be written. Eduard, our kind, deep, speaker, showed us through the myth, and being a doctor brought it down to a cellular level. Fascinating. One such delight was him explaining how the innocent fool (Parsifal) enters into the Magic Castle of the Fisher King that arises out of the middle of the mist in his search for the Holy Grail. He explained how a cell protects itself from invasion by setting up a bouncer-like immune defense, hence the invading cell cannot jump over the moat of the castle, nor ram through the jammed-shut big wooden doors. However a cell does allow fusion with another cell when the cell appears to be exactly the same. Out comes the red carpet. Wow!

We are allowed entry when become unthreatening, when we are simply the same.

If I were to think that I was to live in a foreign country, even a place like Nepal where I’ve already been, I would still feel nervous and worried. But I wouldn’t be surprised to feel knots in my stomach. I would expect to feel different in my western clothes, I would expect not to understand with my different language, I would expect my body to react in rather unpleasant ways to the incomparable food and hygiene levels. And I would consider this all part of travelling.

But not in England. ‘England,’ is the response I give to ‘Where are you from?’ England is the place where I took my first lung full of air. England is where I was brought up on baked beans and jacket potatoes with cheddar cheese. England is where no one takes the piss out of my accent.

But when from the age of 21 you’ve only clocked four years in the country, with the other fourteen years being in countries recovering from dysentery, or selling chickens in the street, learning how to communicate in different languages, or learning new value systems, England is suddenly as foreign a Timbuktu.

I am still struggling to turn on the television. In my own mother’s kitchen I can’t work out where she puts her stuff, how to use the potato peeler or where the recycling should go, my piano has gone, and I have no idea what people are talking about when it comes to culture, TV, bake-offs, and other such stuff that without knowing has become a national secret code. If you don’t know who Gary Barlow is (not to be confused with Ken) you will be laughed at, stared at in amazement and asked ‘Where the blummin’ ‘ell ‘ave you bin?’ To which I have learnt to be quiet.

Quite frankly. I am out of it. I am wearing the same clothes, I am speaking the same language, the food warms my innerds with childhood memories, and yet, I just cannot get 'in'.

And so faced with tremendous nothingness month after month I found myself dribbling on the dirty floor of my psyche rolling around in moderate to severe depression. I was drowning in feelings of being pathetic, unworthy, despicable.

Plunge. Into the dark.

It was while I was slobbering into my isolation that my good friend Rafa shouted down the ravine ‘Julia! Julia! Get up off the floor! Get up, stand up!’

He told me that it was horrible to see a friend wither away.

He told me he knew he could do nothing.

He told me to stand up. On my own.

I told him I couldn’t. I had no friends. I had no resources. No car, stuck in a village. No nothing.

It was such a harsh message, with an undercurrent of deep love that - I heard - I heard it in my heart - and from behind the waterfall of snot and tears, I managed to shakily stand and take a few gingerly steps back up into the world.

I thought about how I would have reacted if he had told me what to do, if he had given me direct instructions, or if he had simply gone ahead and done it for me. I would have wondered ‘Is this right for me? Is he seeing me and my situation properly? Is he projecting his situation onto mine and trying to heal himself vicariously? Is he trying to manipulate me, consciously or unconsciously, for his own ends? Where is his motivation coming from? Can I trust him? Can I trust these actions that I am taking because of him?’ etc etc etc Is he being guileless?

The thing is, him just being there in Spain, saying ‘I’m here,’ was enough for me to feel him. Any more would have jeopardized the whole thing.

And so, feeling his innocent support, I went to a psychologist for help, and she invited me to a Pesso Boyden workshop the next Saturday. It is a marvellous technique which, to my eyes, was like family constellations except more directed, deeper, more healing. I felt it was more contained. I shan’t go into more details, else I’ll be off through other fields and valleys, but part of the workshop was to stand in on the others’ ‘structures’ as their significant others.

I found myself being a woman’s mother. She was in desperate need of being accepted, of being unconditionally loved. And so I set to task. I sat behind her, along with ‘her father’ with our hands on her shoulders and I channelled love, feeling it, really going for it, pouring it into my hands to enter into her body. But she wouldn’t take it. It was like pouring my all into a black hole, nothing coming out. It was swallowed whole, without a chance to shine even a little bit. I kept trying, I keep really trying, until I started to feel frustration and the welling of anger. All she had to do was accept and she wasn’t. She was consuming and destroying. Resentment. It slowly dawned on me that me sitting behind her in her healing session with my hand on her shoulder sending frustration, anger and resentment was not exactly textbook. So I gave up. I just sat there. I thought it was better than anything negative. Her shoulders suddenly relaxed. Her muscles allowed entry, her psyche opened just a little to allow in a shaft of light. I didn’t do anything, because I’d got myself into this new posture, of just being. I just was. I didn’t try and force love onto her, I didn’t force her to accept my offering. I just sat there. I was just was. I am be me. I mean it is difficult to put into words, because it is so simple. I was just present without forcing me or anyone else into what I thought should happen. I just was there.

And I learnt for the first time to be in this powerful place: healing power.

Being in the north of England, back to my roots, I have had the pleasure of reconnecting with Brass Bands. If you don’t love brass bands, then it’s a sure bet you’ll dislike them, scoff and jeer. But if you love them, you’re in the secret society of loving something that is heritage, that is part of our northern English blood, that has been with us since we were all in villages and down the pits, in the mills and building canals. This is flat cap and steak and kidney pie. This is authentic. Brass bands are like folk music compared to Opera. Opera is fine. It is beauty close to the sterility of perfection descended from heaven. Folk music is the gut of music that has come up from the ground, fertile in its natural knobbiness, along with the potatoes that kept us alive through the winter. Like Tim Blanning quotes in ‘The Romantic Revolution’ (p122) ‘It was the innermost emotions of the folk that created folk songs and so the folk sees them as its children and loves them with its whole heart’.

So there I am, suddenly playing music again with people I had played with when I was a teenager in the National Champion (...pause for surprised admiration...) Stockport Schools’ Brass band. People keep asking me ‘Is it Julia or Julie?’ until I get confused myself. We’re practising for a contest. It is starting to get hairy. We are down to last minute detail and three rehearsals a week. We’re off to Blackpool ready to put ablaze the Winter Gardens this Sunday.

I really want to give it my best, for the sake of Marple.

But last night, after a rather disastrous practise concert on Saturday night in Crewe, we were all very sensitive, open to change, because we know we have to. We didn’t show hardly any difference between ff (double forte) and f (forte) nor mf (mezzo forte)...nor did we have a range of pianos (quiets). We are just blasting it out; all of the time. This is not colouring; this is that grey brown muck you get from muddling colours. So, I decide I am going to soften all of my dynamics (which to be fair I think the other members of the band do too...all of us a bit afraid to play out, to become exposed). I stop putting so much into it, I stop blowing so hard, I just ‘play along’ with the others. I stop trying so hard. I can barely hear myself for I’m merging in with the others’ sound. And that, ladies and gentlemen, is what you need in a cornet section, and in the band in general: one sound.

I realised I’d been trying too hard. We all had. We now have the notes down pat. We know the piece. Now it is time to allow it to breathe, rather than the asthma attack we were giving it before. And suddenly the band, for my ears at least, had a step change. The music became subtle. Parts came out and flew above in wonderful somersaults chirping spring without being stepped on by the heavy giant feet of us blasting out our parts. Music began to happen. We played as one.
-

I don’t know if I’m getting my point across? I have had so many conversations with people, who deep down are afraid of being mediocre. I strive. I strive to stand out, to be something. I want to be noticed. I don’t want to just merge in. I want to have an active role, so that I have a chance to stand on the pedestal and receive the jubilee cup prize amid crowds of applause. Of course in my speech I don’t talk about how brilliant I am and have been, just how it was thanks to the effort of the team - and that makes me all the more brilliant.

Is a better perspective that our power is in simply knowing who we are and being it, unashamedly, quietly, gently, kindly, boringly even, without forcing ourselves to be anything else? Is not our part in humanity to sing our song in delicate harmony with the others so that we merge into the symphony (‘syn’ together ‘phone’ voice)?

In this communion of simple silent being is the role of the innocent, guileless fool, characterised by Parzival, where we are at our most potent? 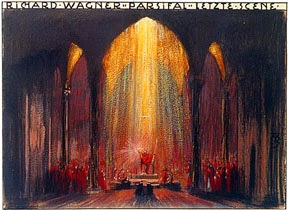