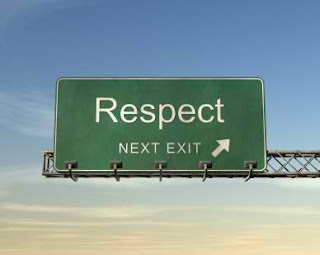 Imagine that in the 15 generations before us there are 16,384 direct ancestors within us (fathers of our fathers, mothers of our mothers) all with their own gene set, all with their own characters. Within that group we are going to have a right old party of nuns with criminals, geniuses with the mentally simple, rough farmers and soft sophisticated folk.  Within us are all sorts of varying qualities of genes. If we imagine that we can group these characters that make up our genes, it means that within us we all contain “levels” of being for example from being greedy and wanting more coupled with a killer instinct if it were necessary…."higher" levels where instead we all decide to split things equally in half to avoid disputes….and then there are the levels where we give in unconditional love just for the sake of unconditional love.

So how about this for an idea?  Respect is about what "level" you recognise in each person and yourself.

Following this idea a good relationship would see the real potential of the other and stay concentrated on that imagine so that the other can gain crystallisation of that optimal character.  And vice versa.  A "bad" relationship is the one that tries to bring the other down to their own level…for they are, lets say, vibrating at a lower down respect for themselves (even though the need to bring the other down to their own level is only because they want to be with the other and commune).

And then there is self respect.  It comes from within.  We have to decide who we are, which is not an easy choice given that we are changing all of the time…it is more difficult to stay nice when we are starving hungry, and coming out of a yoga session you feel divinely different to when you have come out of a horror movie…We have to decide who we are, what sort of person we are.  And here it comes, we can´t just think it and say to ourselves that we are the dogs bollocks at playing the guitar, when we can´t play any chords clearly.

We have to ground our respect.  And how do we do that?  By bringing it into the reality, by being it.

We have to practise it every moment that we can.  If we want to be loving, be loving, friendly then find every opportunity to be friendly, peaceful then find peace, because then you will have EVIDENCE that you REALLY ARE loving and friendly and peaceful…because you have repeatedly been it, you are it, and so you naturally have respect for yourself because when you say that you are peaceful you know you are saying the truth and you respect it as true, because it is.  Which is where that phrase of the Buddha comes in that I had never understood “If you knew what I know about the power of giving, you would not let a single meal pass without sharing it in some way.” Because as you are what you say you are, people give you the energy that you are it, and it sinks into your bones.  People respect you for your acts when they are in tune with who you really are.  Each time you do what you say you are you have more of a bank of this energy flowing from you and at the same time your acts (which you begin to respect as real) are mirrored and supported, confirmed by the respect of others coming back, until you can crystalise it into a stable structure of character.  You are making a deposit in humanity´s account.  You can be here longer, for longer periods of time, in fact you are this most of the time.  You are peaceful, happy, rich in spirit (or whatever you have decided you are).  Each time you give of your self, you feel happy, not really because you have given, but because you have had an opportunity to do something kind that makes you respect yourself and gain respect because you did it from your heart and you do it just because it is in you to do it, because it is you.  That feel good lasts making you feel good about yourself, happy, respectful to yourself and others. 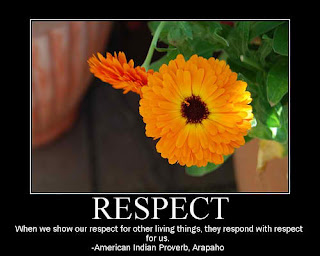 But it´s not about just giving to feel good - no siree! Like the man who writes down every cent he gives to charity in pompous pride.  There is a greek joke about it. The guy is at the gates and Saint Peter relays to Christ the list of charity he´s given to the poor:
"25c to .....
30c to .....
15c to....." etc etc
Until Christ says "add ´em all up".  So Saint Peter gets out his calculator and says "535 euros"  and Christ responds "Give it back to him and send him off to Hell!"

It´s a fine line.  We feel good being good, but we can´t be good to feel good.  Our intention has to be fine tuned.  There is a Greek phrase that sums it up nicely "Do good and cast it into the sea" which means let no one know that you have done good, be discreet, don´t expect reward, because the irony is that if we expect reward we´ll be given our dues and sent off to hell.

If we expect no rewards we are rewarded hansomly for we gain respect for ourselves, we see who we are, we crystalise into more peaceful, happier selves.

And so it goes on, in ever decreasing circles.  To our core.  To our essence.  To who we really are.  Grounded Gods.
Posted by Unknown at 00:12

Thank you for making me thinking for myself deep inside again which I haven't done for a long time. I'm still on my way to decide what I want to be, however, I can't really have complete, true free mind to decide as I can't make decisions without thinking of people around me and take them into account. I just want to find the piece of mind and being more zen to enjoy what I have to do for now. I guess for the moment, what I have to do is just what I want to do. Once I get what I have to do done then I'll feel more relaxed and content. I know it will last only temporarily.

I´ve got to fess up a bit, I´ve exaggerated with the 15 generations for sake of argument to get our imagination juices going...I think it is probably wiser to say, as the Jewish Tradition states, that we are affected and affect seven generations above and after us...which is 128 direct ancestors...but I couldn´t resist going exponential.

Sui Mei, I don´t think what I´m trying to say is as important as you are considering it as. It is simply the characterists that we want to develop in ourselves...you for example are already kind, because in all things that you do there is a good dose of kindness in them, as you prepare your kids pack lunches and care for their daily needs. It´s just the little acts that I¨m talking about, like when Helen Keller said "I long to accomplish a great and noble task, but it is my chief duty to accomplish small tasks as if they were great and noble."